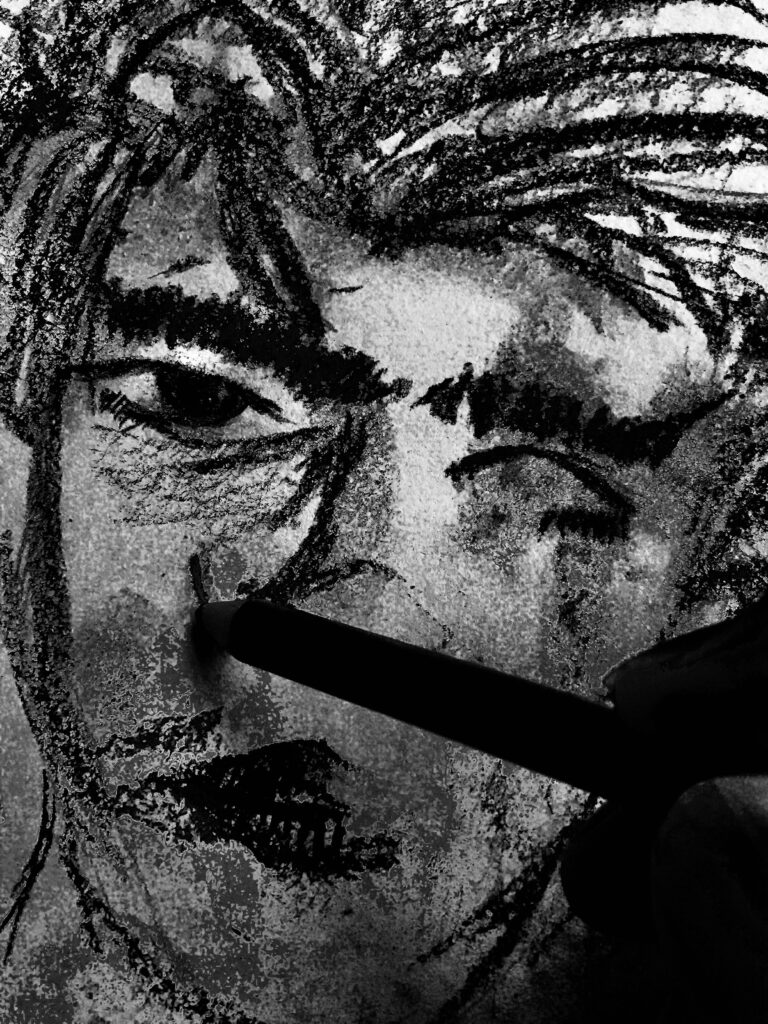 It was like looking at a drawing in progress, a child’s drawing, from very close up. I was bent over it, watching the lines take shape.

There was a complete disconnect in my brain, until he made the final stroke. In my memory it seemed slow and well thought out, but in real time it was a fast, forceful move, slowed down only by the resistance caused by the flexibility of his canvas. It ran all the way from top to bottom, like an exclamation mark finishing his work of art.

Unlike a drawing, the invisible thin lines became clear only after they had been etched and showed red, widening before my eyes, bleeding out like ink on blotting paper, soon running, ruining the original lines and smudging the picture.

I did not know what utensil was used. It was hidden in the palm of his hand, as if the instrument was the secret to perfecting his art.

They were on the sidewalk, the artist on top.

His fingers entangled in his subject’s mop of wild blonde hair, struggling to hold his head ground into the pavement to keep the left cheek facing him while he finished his work.

The crowd kicked at them, few knowing how it had started—irrelevant to them—simply a diversion to pass time; an open invitation to take out their own rage. My screams accomplished nothing—an expected reaction to any sidewalk scramble—ignored, willfully disconnected from the repulsive reality before our eyes.

Then it was over, and—while uttering threats—the subordinate nonchalantly asked a bystander for his mickey, took a swig, refused medical care and swaggered off, accompanied by one of his friends—leaving the sidewalk painted red.

The subjugator hung around, justified himself—sensing through the thick alcoholic fog of his brain that there was a need to explain—apologized for disturbing the peace, but was clearly proud of his legacy permanently carved on his subject’s face.