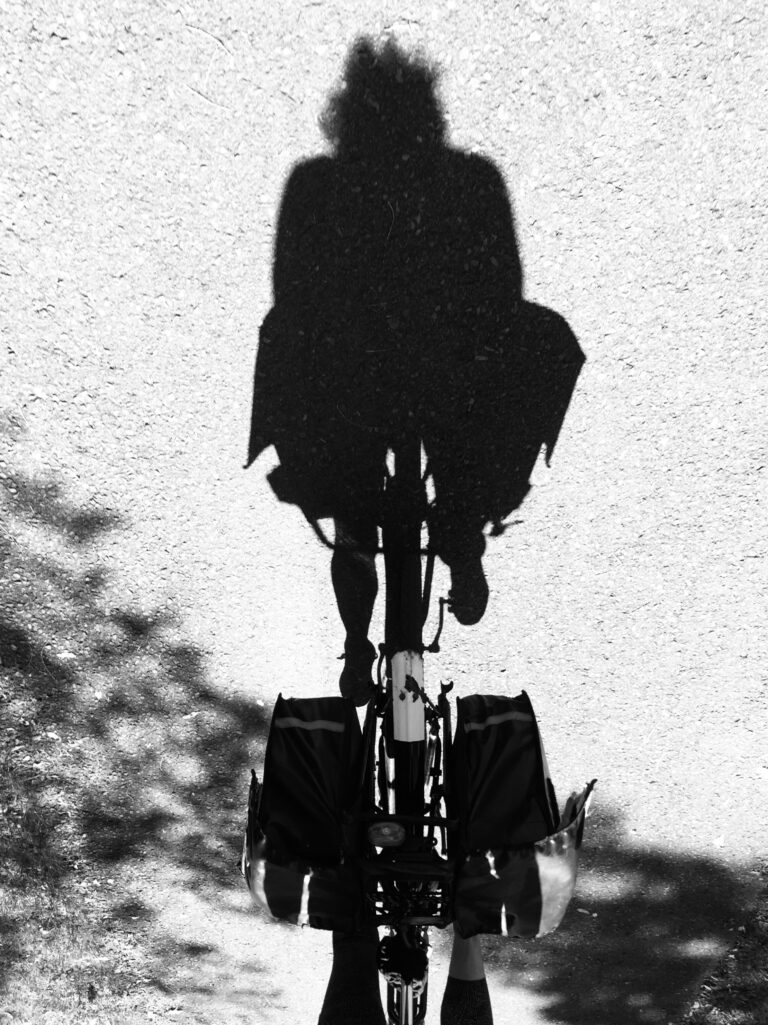 I saw them as soon as I entered the alley.
It was close to midnight.
I was about 20 meters into the alley and could still turn around and take the subway home. Under my breath I cursed Steve; why had he not offered to walk me back, to pick up my bike? (I would have declined, but that was irrelevant right now.) We had attended an obligatory work function, grabbed a beer afterwards, and parted ways.
Now here I was; alone in the alley with two hooded figures visible in the alcove to the backdoor of the Drop-In centre—and more pertinent to my situation—the door to the bicycle room where I had left my bike.

I hate the subway, and decided to put my nose in the air pretending all was well, while sniffing out the danger with every step, like a hunting dog with its nose in the wind. I mean, does society not instil all kinds of ungrounded fears which cause us to live like hunted animals always on the lookout for the next predator, while we were simply created to live in community?

I came up to them now and saw there were two guys—in their early thirties maybe—wearing black hoodies. As soon as they saw me, one of them asked if I could give him some shoes. He obviously was familiar with the Drop-In services. He proceeded to tell me he had just gotten out of jail; he was wearing his blue canvas step-ins.

My first thought was, “Great I really hit the jackpot!” and all my previous lofty thoughts about community were replaced with, “Why were you inside?” But of course I did not ask, and actually I did not want to know the answer right this moment.
(Only for the retelling of the story might this have been of interest, which was very secondary to the fact that I was one female on two males—one of which an ex-con—alone in an alcove in an alley. I was painfully aware that I was living a story, but there were too many potential endings to the story to worry about gathering descriptive details.)

I told them the Drop-In was closed right now, and even coming back tomorrow might not be helpful since we only serve youth . . . maybe the Scott Mission tomorrow? As I spoke I took out my keys and opened the bike-room door.
An alarm went off.
In my head.
The other guy spoke up and asked me if I wanted to buy a phone, he pulled one out of his pocket and showed me an iPhone. I walked the 15 feet towards the back of the bicycle room and kept talking while I unlocked my bike.
In my mind I was somewhere else: two guys, one exit to a deserted alley, the perfect rape-scene tape playing.
I responded casually, “No thanks I am fine, I don’t really need a phone, I have one.” The next question followed immediately, if he could use my phone to make a call?

By this time I was fully aware I was an idiot and more things could go wrong than I could ever justify for hating to take the subway. Even the Toronto transit system has a limit as to what risks you are willing to take in order to avoid it.

I said I could give him change to make a call? I took out my wallet and wondered why I had deemed it better to lose my wallet over my phone? At least my phone was a work-phone and, after all, I was on property, even though I was pretty sure this would not qualify as a work-incident. To my surprise he said, “Ok,” took the change and said, “Thanks.”

I had my bike out the door and was locking up. They smiled, said thank you one more time, and walked off.
I stepped on my bike.
I was laughing; partly from relief, partly at how I would explain this to anyone, but mostly because society with all its labels and assumptions had been proven wrong!

The presuppositions of my perceptions, and what those perceptions had turned people into—like monsters under your bed, which are never really there, but very real in your mind—had vanished and gave me a feeling of exhilarating freedom.