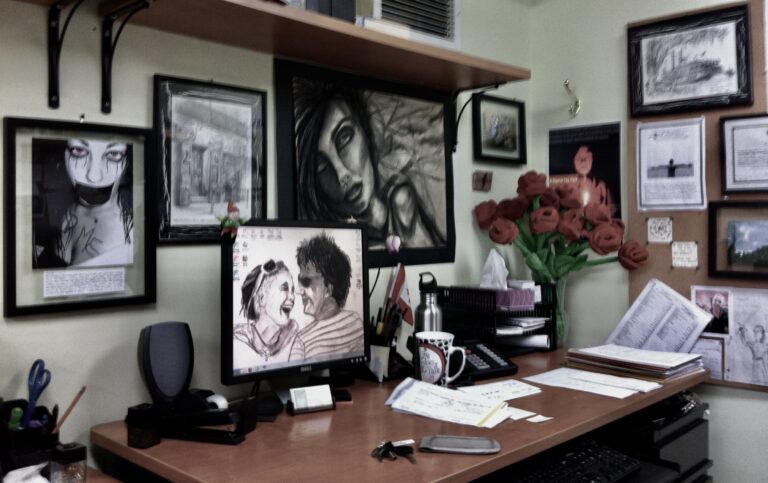 Boundaries . . . they are so self-explanatory on paper.
But when it comes to people, real live human beings—like you and me—where are the lines?
We all know them, the hard-ass boundary drawers; ne’er shall anyone cross the line, not with a touch, a hug, a show of emotion.
Ne’er risk “walking with someone”—alongside, among, near, beside—ne’er become liable by “being there for you”
—“being” : in the flesh
—“there” : wherever/whatever you are at
—“for” : not against or judging, but open-minded and humane
—“you” : not the anonymous larger labelled population, but you!

Most of us have been caught in the crosshairs while crossing boundaries, the intersection of humanity and institutionalization, regulation, standardization, systematization, regimentation.
The human element makes life messy, deregulates it by necessity; there is not just one standard for all; the system fails us when we come face to face with the individual.
Relationships are unique and based on our respective boundaries, the precarious balance of your and my personality, triggers, feelings, identity, authenticity—trustworthiness, dependability, realness, reliability, credibility, the thesaurus goes on and on . . .

But you get it, right?
You cannot be authentic and never cross the boundaries.
I have had to make that call—am still making those calls. It is a balancing act; decisions are based on the offset of the values of one or the other—yours or mine.
Whose position/reputation or existence/vulnerability is in the balance?
What will it cost you?
What will it cost me?
Tomorrow . . . I want to be able to look you in the eyes and encounter respect.
The same respect you will recognize in mine.
Respect requires me to make decisions, sometimes well thought-out, at others times instantly.
I don’t always get it right.
You be the judge.

My drugboots . . .
That is what I called them for as long as I owned them: a black pair of embossed leather designer boots with long points. Italian leather inside and out, the kind that looked like they should be uncomfortable but you could keep on your feet 24-7.
I got them on the street, Red Light District, Amsterdam.

I wanted a pair of new boots for a while but just had not found what I was looking for, did not know what I was looking for, until I walked out of the drop-in onto the street and ran into one of the girls.
The girls were the ladies who worked the streets—many addicted to substances—who gladly accepted our hot coffee with lots of sugar and cookies, especially on damp, raw days—which seems like always during Amsterdam winters.
I was barely out of the door when Trish greeted me, “Hey Aleke, do you need boots?” This was the wrong question, at the wrong time. Not only did I need boots but I am addicted to boots. She hit my weak spot.
On the street there is no room for hesitation. My guess was that she must have gotten stuck with them—a deal gone bad— or “picked them up” somewhere, but asking for more details was against the code of ethics. Now she was trying to trade them in for cash.

I attempted to get out of the situation by asking, “What size are they?” I mean, what were the chances they would be size 81/2 – 9?
“Nine,” was her instant reply.
“Shit!” was my immediate thought.
“Oh, I don’t know Trish you didn’t get them through some illegal deal, did you?”
“No, I swear to God, I got them honestly.”
That was that.
I could not question her further and insinuate she was lying without losing relationship, and I would be lying if I said I wasn’t looking because I had been, again, just the day before—black leather boots—and there they were.
The only thing left to ask was, “How much?”
And $10 later I owned a pair of boots I totally wore out that winter.

Boundaries are parameters set while sipping coffee in the office.
But on the street—where you have to think on your feet—everything changes.